(Readers: Please note this blog is constructed as a story. While not all chapters are linked, I think the story will be more meaningful by starting at the beginning.)

Scene: Cleo and Queeny Back at the Workshop

Cleo: “Queeny, let me take this presentation – it’s about pay for CEO’s and how it compares to pay for average workers. Caesar is…or at least was…always whining that other CEO’s make more than he does.”

Queeny: “George III does to. Even though we had our own business and we owned most of the shares, he was always comparing his salary to someone else. Never enough. He’s always been jealous that Caesar makes more than he does.”

Cleo: “I’ve read that CEO salaries increased much faster than the average worker. But how much?

Queeny: “Look at this chart. It compares how much compensation increased between 1978 and 2011 for CEO’s and the average worker.

Queeny: “Am I reading this chart correctly? Doesn’t look like there’s hardly any increase for the average worker.”

Cleo: “That’s what this chart says.”

Cleo: “Pay for CEO’s is up, up, up and pay for regular workers is flat, flat, flat. Caesar never did talk about worker pay, only CEO compensation. No wonder people are so upset with the wealthy.”

Queeny: “Ole King George III said we had to move some operations to China because worker costs were too high. He sure didn’t sacrifice – rather we didn’t sacrifice – and the workers did. I don’t feel so good about how we treated those employees. Some people that we let go had been with the company more than 20 years.”

Cleo: “When Caesar laid off people he said the company gave them a retirement package and some sort of buyout bonus based on how many years at the company. At what did Caesar get for giving those people an early retirement? He got a nice bonus check and more stock options.”

Queeny: “Something is wrong with the system when someone spends all those years working for a company and making money for the owners, then boom, they are out of a job and the CEO makes more money.”

Cleo: “I know capitalism can be brutal but the focus seems to be out of whack. When did CEO’s become so valuable and everyone else so expendable? Seems like a lot of self aggrandizement to me. And a lot of greed.”

Queeny: “You know the more information we see from the workgroup, the better I feel about joining this revolution.”

Cleo: “Me, too. We’ve been so out of touch and so self centered. What happened to everyone working for the common good? We can all be different and still help each other.”

Queeny: “OK one more review, then we need to get the info uploaded so members can review before the next session.”

Queeny: “We are anything but techies but we have come a long way using computers. Our kids and grandkids think we are still in the Stone Age but I’m proud of all the progress we’ve made.”

Cleo: “OK final topic. Before we move on I want to make one more observation about income distribution. First, let me emphasize that I think religion and politics don’t mix well.

Cleo: “That said, most Republicans seem to promote Christianity. All my religious teaching has included emphasis that we need to take care of those in need. In Deuteronomy there is mention of what might be called a safety net.

Queeny: “Yet, a number of self-proclaimed religious-right legislators keep cutting holes in the safety net. That really bothers me.”

Cleo: “I though some Federal legislators were bad. But the state legislators in North Carolina might be the worst. These yo-yo’s cut payments to unemployed workers, reduce teachers’ salaries, and a bunch of other crazy stuff. No wonder the revolution started in Charlotte. Makes me want to go back to Rome.”

Queeny: “You’re not from Italy.”

Cleo: “Not that Rome, Queeny. My Rome. Look, I understand there’s a legitimate argument about how big the safety net should be. But effectively cutting all support for people out of work makes no sense.”

Queeny: “Especially when many jobs were eliminated through no fault of the worker. I’d be upset, too.”

Cleo: “OK, I made my case about religion and the safety net. Let’s get back to the last topic of the workgroup.”

Queeny: “Here’s an interesting one – taxes as a percent of income. How many times have I heard that a certain percentage of the population pays no taxes.”

Queeny: “According to the information from the workgroup, the only truth to the claim is about income taxes, Federal and maybe some state taxes. But there are all kinds of taxes that people pay – sales tax, excise tax on phone bills, property taxes.”

Cleo: “But renters don’t pay any property taxes, the property owner does.”

Queeny: “Cleo, c’mon. You think property owners don’t raise rent to cover property taxes? Of course they raise the rent. The difference is the owner gets to deduct the property taxes off income taxes and the renter cannot.”

Cleo: “If this chart is right, people with the lowest incomes pay someplace between 15% and 20% of their income in taxes.” 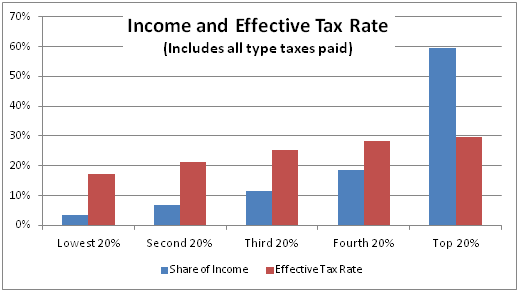 Queeny: “Tell me that again. I’m not sure I heard you correctly.”

Cleo: “You heard me right. For people with lowest incomes, $1 out every $6 goes for taxes. For the next group it’s more than $1 out of every $5 goes for taxes.”

Cleo: “The burden is not really regressive since people with more income have a slightly higher over tax rate. But, for people with barely enough income to buy groceries and pay rent, taking one out of every $5 or $6 to pay taxes eats up money that could otherwise be used for food, feeding kids, clothing…necessities. How would you like to have to pay taxes and then have no money for groceries?”

Queeny: “You really believe what you are saying?”

Cleo: “Yes. People should have enough money to eat decent food and have decent shelter.”

Queeny: “Are you saying everyone should qualify?”

Cleo: “Yes, but. And the ‘but’ is that I am also saying that who are able to work should work. If there are no jobs in the private sector, then the person needs to work in a government-sponsored job.”

Queeny: “Part of my family worked in one of those agencies – WPA or something – and built roads and bridges.”

Queeny: “Seems like a good idea to me. I would rather have people working and being productive than doing nothing and collecting checks.”

Cleo: “How are we going to make this happen?”

Queeny: “Let’s ask the workgroup for ideas. Speaking of the workgroup, we need to get the packet out the door…rather uploaded.