(Readers: Please note the blog about the 5th revolution in the US is constructed as a story. While not all chapters are linked, the story might be more meaningful by starting at the beginning.)

Scene: Jordan’s office with Matt, reporter for major publication. Matt has been asked by POTUS’ office to help write the story of GM. POTUS wants to use the information as part of a plan to help rebuild US manufacturing. Entries about GM begin #41.

Matt: “So the Squeaky reigns ends when, sometime in 1990.”
Jordan: “Yes, ten years of proctology decisions. I will say the last major idea had merit.”

Matt: “Really? What decision was that?”
Jordan: “At the Los Angeles Auto Show, early 1990, Squeaky announced GM would build a 2-passenger electric car.”
Matt: “Was that the EV1?”
Jordan: “Yes, but the original name was ‘Impact.’ Great name for a car, huh? Impact.”
Matt: “Whose idea was that?”
Jordan: “I don’t know for sure but I should. Might have been Smith. Might have been someone else. But Smith bought into the name.” 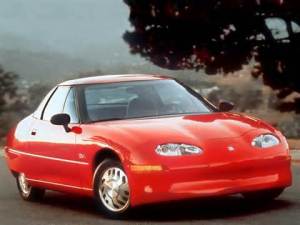 Matt: “You ended up on that program, right?”
Jordan: “Yes, and I give Squeaky credit. The idea of GM taking the lead on electric vehicles was a good strategy, but…”
Matt: “But what? Poor execution, again?”
Jordan: “Setting proper expectations is critical to any successful program. If you over-promise, then the program might be labeled a failure even though it would have been considered successful if proper expectations had been set.”

Matt: “You’re saying too high of expectations can create the perception of failure.”
Jordan: “Absolutely. And that was one of the problems with the electric vehicle program. Expectations far exceeded what was likely to happen. Yet, many aspects of the program were highly successful.”
Matt: “You need to explain more. I need some reference points.”
Jordan: “On the positive side, many electronics and features, even in today’s cars, had their origin during the Impact program. The program really helped changed thinking about integrating electronics into vehicles.”
Matt: “No one seems to know that.”
Jordan: “You’re right. That was a real positive that helped improve fuel economy on every new car and truck. Now, let’s talk expectation. Impact…err EV1…was announced as a regular production model. Cars in the category need to sell a minimum 20-25,000 units per year to be considered even marginally successful.”
Matt: “That seems like a reasonable number.”
Jordan: “The major hurdle for EV1…aside from being electric, was the 2-passenger configuration.”
Matt: “But you bought a Miata and its 2-passenger.”
Jordan: “I bought a Miata for me as a personal car. On occasion I have a passenger, usually to go get ice cream or something like that. I also bought a Miata because it goes vroom, vroom.”
Matt: “And the Impact didn’t go vroom, vroom.”
Jordan: “You’ve driven an electric vehicle, haven’t you? I know you driven a golf cart. The only noise is a little whine from the motor and the tires on the road.”
Matt: “And guys with sporty cars want noise.”
Jordan: “Beyond the vroom, vroom part 2-passenger cars have an inherent problem – space. People want a back seat, even if it is cramped. And with no back seat, a lot of people who liked the car and the idea of an electric vehicle just walked away because there was not enough room.”
Matt: “I hear what you’re saying but when you look on the road, seems well more than half the cars have just one person. Was there any research to support why people claimed they needed more space?”
Jordan: “Lots of research indicates people buy cars, and especially SUV’s, for occasional, even rare use – one or two trips per year. 2-passenger cars are basically 1-person cars with room for briefcase, backpack, golf clubs…and the occasional passenger.”
Matt: “How can you get around that kind of behavior?”
Jordan: “You can’t, really. We even considered allowing people to have access to a SUV for 1-2 weeks a year through AVIS. But people just don’t want the inconvenience of picking up another vehicle…even if there is no charge.”
Matt: “Seems like more of an excuse.”
Jordan: “I agree. But let me give you an example where the need for room is real. We’re at a research clinic in Phoenix. A lady drives the Impact and says to me, ‘I really love the car and I would buy all electric if…”
Matt: “And the ‘if’ was?”
Jordan: “If it had a back seat. I drop my two kids off at school in the morning and I have a briefcase and purse. Even a small back seat would be OK. But I can’t buy a 2-passenger.”
Matt: “So now you’re discovering the sales potential might be less than the 20-25,000 necessary for a regular production model. And the problem with proper expectations.”
Jordan: “The research suggested no more than 5,000 units per year and less initially. And the 5,000 assumed a very favorable MSRP.”

Matt: “So know you have a piece of the pie but not the whole pie. Knowing the problems with a 2-passenger, why not add a back seat? The car was still a prototype, right? You had time to make a change.”
Jordan: “Funny you mention adding a back seat. I said the same thing in a staff meeting right after the research in Phoenix.”
Matt: “And what was the reaction?”
Jordan: “This is close to the quote, ‘We can’t change the design because Roger Smith said it would be 2-passenger.’”
Matt: “Was Smith still chairman of the Board?”
Jordan: “No. He was a board member but not chairman. Yet, managers more senior than I were still so intimidated they would not go forward to fix an obvious problem.”
Matt: “Did the second seat idea have support among other staff members?”

Jordan: “The manufacturing manager accused me of trying to sabotage the program because I would not support sales volume of 20-25,000 units for the existing design.”
Matt: “A classic case of shooting the messenger.”
Jordan: “That’s a lesson we need to make sure is in the write-up for POTUS. Listen to your customers and your staff, especially when you don’t agree.”
Matt: “So noted. But despite the limited sales forecast, wasn’t support for the EV1 concept among the public pretty good?”
Jordan: “The fact that GM was taking the lead on introducing a viable electric vehicle was great for its image.”
Matt: “GM sure needed a boost following Squeaky. It needs even more of a boost now. But how do you know it was good for GM’s image?”
Jordan: “We hired a company to measure coverage about GM — articles in newspapers, magazines, TV coverage. Remember at the time the internet was in its infancy.”
Matt: “Results were what?”

Jordan: “The EV1 group generated more positive publicity about GM than the rest of the company combined. And that lasted for probably three years.”
Matt: “Promotion budget must have been pretty healthy.”
Jordan: “Oh contraire, Matt. The dollars we spent were a fraction – and I mean a tiny fraction – of the marketing budgets for the car divisions. I think our total marketing budget was about 1% of what Buick spent and Buick’s budget was about 1/5 of GM’s marketing budget. We’re talking peanuts.”
Matt: “That’s impressive. All the positive coverage must have generated widespread support inside GM.”
Jordan: “I wish that were the case but just the opposite happened. There was a lot of opposition.”
Matt: “Another bummer story coming up. GM demonstrates how to grab defeat from the jaws of victory.”
Jordan: “That’s what happens with back asswards thinking. I’ll take part of the blame for not generating more support inside the Company. And I will explain what went wrong at my end…after we take a break.”