(Readers: Please note the blog about the 5th revolution in the US is constructed as a story. While not all chapters are linked, the story might be more meaningful by starting at the beginning.)

Scene: Coffee shop with Jordan and JC. Catching up on recent events.
JC: “Jordan, old boy, where have you been? Besides, you look awful.”

Jordan: “Thanks for the compliment JC. Nice to see you, too.”
JC: “Seriously, where have you been? You OK?”
Jordan: “I’m fine, I think. And I appreciate your concern.”
JC: “So, where have you been?”
Jordan: “Holed up in my office on an assignment for POTUS.”
JC: “Some project where you’ll be put on double-secret probation if you tell me?”
Jordan: “Nothing secret…at least no one told me not to discuss it.”
JC: “So what is it?”
Jordan: “POTUS is developing a plan to rebuild US manufacturing. He asked me to use my knowledge of and experience at GM for any lessons that might be helpful.”
JC: “You’ve been away from there for a while. Besides GM seems to be in a lot of trouble.”
Jordan: “That’s one of the lessons. How did GM go from the world’s leading company to basically a so-so player…at least in the car business?”
JC: “You have to write all the stuff yourself?” 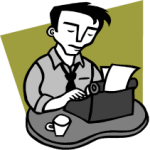 Jordan: “No, fortunately. POTUS’ office assigned a reporter.”
JC: “I came by your office the other day and saw Matt…”
Jordan: “Pardon me for interrupting but his involvement you have to keep quiet. We don’t need a bunch of people claiming liberal bias before the report is written. Forget you saw him. But, he has been a great help.”
JC: “But why the haggard look?”
Jordan: “Talking about GM…or at least what I know about GM…during the early years was great fun. And frankly, truly inspiring. They did a great job.”
JC: “A lot of those years Sloan was in charge, right?”
Jordan: “How did you know that?”
JC: “Remember, I’m an American history major. Plus I read a lot. Plus I’ve known you since you could barely see over a split-rail fence.”
Jordan: “A very long time.”
JC: “When you said you were going to the Sloan School at MIT…I knew about MIT but not Sloan…I did some research on who Sloan was.”
Jordan: “So you read up on Alfred P. Sloan.”

JC: “And his middle name was Pritchard. So there.”
Jordan: “You are good. Anyway, telling the story about GM quit being fun when we started to discuss the 1980’s under Roger Smith.”
JC: “You were at Buick, then, right? From all you’ve said that was a great assignment.”
Jordan: “Buick was loads of fun. And I’d like to think I helped.”
JC: “So what’s the conflict, already?”
Jordan: “Until Matt starting probing, I’d never put the Smith regime in proper context. I’d thought about a lot of what went on but never put all the pieces together or really assessed the impact.”
JC: “And what was your conclusion?”
Jordan: “Smith…aka Squeaky in certain circles…put GM on the path to bankruptcy.”
JC: “You think intentionally?”
Jordan: “No but he intentionally caused harm to parts of GM.”
JC: “Such as?”
Jordan: “Such as the UAW and such as Flint, MI.”
JC: “Why?”
Jordan: “I don’t know exactly why. But I think Squeaky believed the UAW members made too much money.”
JC: “And therefore were effectively stealing money from GM…or at least taking it unfairly.”
Jordan: “More like taking part of Squeaky’s bonus.” 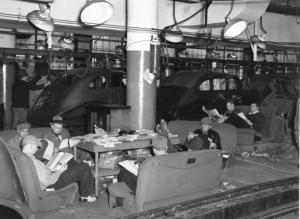 JC: “But why Flint?”
Jordan: “Because GM was forced to recognize the UAW after a sit-down strike at Fisher Body #1 in Flint.”
JC: “When was that strike? Late 1930’s?”
Jordan: “1936-37. And I don’t think Smith ever forgave the workers in Flint for the strike…or the people who supported the workers.”
JC: “I don’t want to dredge up old stories but I can tell by your voice talking about the decline of GM has been painful.”
Jordan: “The pain only gets worse the more we talk about GM post 1980. Let’s get a refill.”