(Readers: Please note the blog is constructed as a story. While not all chapters are linked, after reading a few recent entries, you might want to start at the beginning. More about the blog, how the characters are constructed and about the author.)

POTUS: “Jordan, this is the president.”

POTUS: “Need some advice about getting Congress…and the country…to work together again.”

POTUS: “I know.  It’s been probably 40-50 years since we had a real working Congress.  But after the revolution there’s hope.”

Jordan: “Glad you think so.  The people certainly think we need a working Congress.  Getting the two sides of the aisle to work together might take a while.”

Jordan: “Like most people, I always assumed someone like Confucius said that.  But anyway, I think there is a critical first step.”

Jordan: “Clearly defining a goal that (i) is easy to understand (ii) has a specific timeline (iii) can be measured (iv) is relevant to most people.”

POTUS: “So you’re suggesting a rallying cry of sorts.”

Jordan: “Rallying cry…yes, of sorts.  But the goal has to have true meaning.  Not just some slogan.  Think about those times when the Congress and the country have worked together.”

POTUS: “WWII for certain.  Another was getting a man on the moon in the 1960’s.  I still marvel at how much was accomplished so quickly.  Post 9/11 for a while but not very long.  What other examples?”

Jordan: “Since WWII, not many.  Maybe the war on poverty.  But truth be known, that was more LBJ strong arming Congress than widespread support.”

Jordan: “What about trying to end the Cold War?”

POTUS: “That dragged on for a long time and took so many twists and turns, I’m not sure.”

Jordan: “So, as you said, it’s been 40-50 years, maybe longer since there was a program that was clearly understood and supported by the public and Congress.  This is not going to be easy.”

POTUS: “No wonder we had the revolution.  Alright, Jordan, what project do you suggest?  What’s going to get the country…or at least Congress working together again?”

Jordan: “Let’s take a look at what needs to get fixed.  Something that’s easy to understand.”

POTUS: “What are some big needs – energy independence, or at least less reliance on other countries.  Improving the environment.  Creating jobs.  Increasing real wages of most people.  Fixing infrastructure.  Reforming…no rebuilding the education system.  Is that enough of a list to get started?”

Jordan: “Now we need to take one of those…and I’m not sure it matters which one…and break it into pieces that people understand.”

POTUS: “…and a project with minimal politics.  Sometime politics baffles me.  For example, I still cannot understand why so-called conservative Republicans are so opposed to some basics of education…like science.”

Jordan: “You and I both know that for many people, religious beliefs trump facts.”

POTUS: “I know but religion and science are not mutually exclusive.”

Jordan: “Now there you go using logic again.  I agree with you by the way.  What’s ironic is that science becomes even more marvelous and fascinating when you add religion on top of it.”

Jordan: “What about rebuilding infrastructure?  Roads, bridges, airports and rail in this country need serious repair and upgrades.”

POTUS: “Add electric and electronic infrastructure to the list.”

POTUS: “Alright, what kind of program will satisfy Republicans?”

Jordan: “With all due respect, your question, which needs to be answered, might be part of the problem.”

Jordan: “Meaning the problem and the solution need to be articulated clearly to reduce…if not eliminate…political posturing by both parties.  The effort to satisfy a political party should not be a primary issue.  Solving the problem should be first.”

POTUS: “OK, then, how are we going to describe the problem?”

Jordan: “Let’s take a lesson from one of your predecessors…Harry S. Truman.”

POTUS: “I admit he was forthright.  But life was much simpler then.”

Jordan: “Funny, I had a very similar conversation with someone the other day.  Her perception of life being simpler during the Truman years was the same as yours.”

POTUS: “At least I’m not the only one who thinks that way.  What was your response?”

POTUS: “You’re right.  Some very tough decisions.  But you know what many people remember most about HST?” 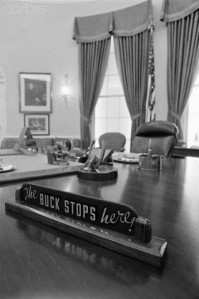 Jordan: “Seems to me the first step for you is getting a sign for your desk that says, ‘The buck stops here.’”

Jordan: “Who cares what they think?  Rather than negative I think it would be perceived as positive.  Whether it’s true or not, people do think the buck stops in the Oval Office.  The sign might be a good reminder to Congress.”

POTUS: “Interesting idea.  And, hey, people elected me to get things done.”

Jordan: “That’s right.  They elected a general manager for the country, not some king or dictator.”

POTUS: “With the sign, I can probably force Republicans and Democrats to start work together.  I’ll state I’m the general manager and I’m leading a team to get things done.”

Jordan: “Now we are getting somewhere.  I beginning to feel as if something positive can actually happen.”

POTUS: “Me, too.  Let’s take a break for a minute and get a coffee refill.”