First-time readers, the dialogue in this blog is set in the future (sometime after the year 2020).  Each entry assumes there has been a 5th revolution in the US — the Revenge Revolution.  More about Revenge Revolution and author, Entry #1.  List and general description of entries to date.  Annual assessment whether Revolution plausible.

Drone Man:  “Gelly, how ‘bout a stiff drink instead?  All this talk about who ran up the debt is bothering me.  Actually, coffee would be great.  Thanks.”

(Drone Man and Jordan each check phones until Gelly returns with coffee.)

Drone Man:  “How else can I take it?  Your attacking my fundamental beliefs.  On top of that I voted for Trump.  I’m still asking myself why.”

Jordan:  “So you made a mistake and voted for the Trumpster.  Yes, the Trump administration was an absolute disaster.  Look, we all make mistakes.”

Jordan:  “But I should have known better.  I let ideology override good, objective analysis.”

Gelly:  “Are we getting sidetracked?  I thought this conversation was to be about economic policy.”

Drone Man:  “My fault.  It’s hard to admit that you’ve been spouting the wrong line for so long.  OK, Jordan, show me that chart you were talking about.”

Jordan:  “You mean the chart with US debt as a percent of GDP?”

Drone Man:  “Yes.  The debt percentage is what you were pounding into me a few minutes ago.  Really should look at the chart but I’m afraid to.”

Drone Man:  “How do I interpret this chart?”

Greenie:  “May I try to explain this.  Doing so will make sure I understand.”

Gelly:  “When calculating the percentage, the numerator is total outstanding debt and the denominator is gross domestic product, aka GDP, for the year.”

Drone Man:  “Gelly, don’t confuse me.  Have you turned into some kind of math whiz?  Numerator, denominator.”

Gelly:  “You know, Drone Man, total government debt outstanding at the end of the year divided by the GDP for the year.  That gives you the percentage debt to GDP.”

Drone Man:  “Debt for the year or total debt?  Makes a big difference.”

Gelly:  “Total debt.  You know, like the sum of how much you owe on credit cards, car loans, mortgage, and whatever else.  Right, Jordan?”

Gelly:  “So if total debt goes up during the year but GDP grows even faster, then the percentage decreases.  The percent also declines if the country pays off some of the debt.”

Drone Man:  “OK, so the chart shows some percentage – ‘a’ divided by ‘b’.  Debt divided by GDP.  But even if percentage declines, the amount of debt can go up, right?  More debt is bad.  Where’s the chart of total debt?”

Jordan:  “Tell me why you think more debt by itself is automatically bad.”

Drone Man:  “They take your deposits…and they lend money to other people or businesses.”

Drone Man:  “OK, I’m the banker…and it must be a big bank.  Who are the two customers?”

Jordan:  “Say Gelly is one…and the other is Warren Buffett.”

Drone Man:  “Simple.  He’s got enough income and assets to pay back the bank.  Paying back $100 mil and he wouldn’t even break a sweat.”

Jordan:  “So, as long as someone has enough income or assets to pay back the note, having debt is OK?”

Jordan:  “If you’d lend to Mr. Buffett, then why are you concerned about lending to the US government?  The US government is actually a better credit risk than Buffett – he can’t print money and the US Treasury can.”

Drone Man:  “Why are you always trying to trap me with these arguments?  Besides the US government has been reckless in running up the debt.  Buffett’s been very careful and very conservative financially.  That’s why there should be a conservative in the White House.”

Jordan:  “Let’s go back to what we talked about earlier and see which administrations have been reckless in running up the debt.”

Drone Man:  “A few minutes ago (Entry #229), you tried to tell me Reagan ran up the debt.  But look at your chart.  At the end of Reagan’s term debt as a percent of GDP was only about 50%.  At the end of Obama’s term it was about 110%.  That proves Obama was reckless and the cause of all the debt problems.  Just look at your own data.  See?”

Jordan:  “Let’s look at this bar chart.  It’s the same data as the line chart but formatted differently.  The bars represent the relative increase in debt as a percent of GDP for every president since Carter.  The height of the bar represents how much more debt as a percent GDP was there at the end of an administration compared to debt at the beginning of an administration.”

Drone Man:  “Before we go farther, what’s this ‘relative increase’ stuff you’re talking about?  Another way of distorting the truth?”

Jordan:  “Drone Man, do you think I would lie to you?”

Drone Man:  “No, but I just want to make sure I understand.  Gelly, tell me what he’s talking about.  I can understand you.” 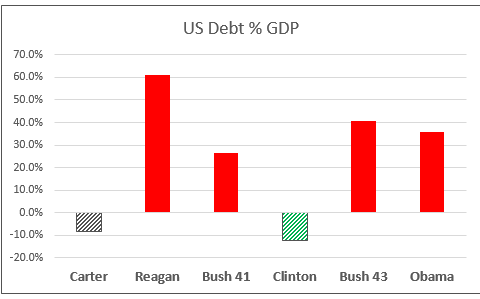 Drone Man:  “Ok. I got it.  Thanks Gelly.  Back to your bar chart.  If I’m reading the first bar correctly, under Carter debt as a percent of GDP declined.”

Drone Man:  “Then under Reagan, the relative increase in debt as a percent of GDP was about 60%.  You said that before but I didn’t believe it.”

Jordan:  “If you add Bush 41 to Reagan and compare against when Reagan took office, then debt went up more than 100%.  You can’t just add up the bars since you have to compare end of Bush 41 against end of Carter’s term.”

Drone Man:  “Why hasn’t anyone ever told me this?  I’ve always been lead to believe that Reagan was a fiscal conservative.  He spent money like a drunken sailor.”

down, or supply-side economics, more as a 3-card money game.  You think you should win but only the shills win.  You always seem to lose.”

Drone Man:  “This chart is awful!”

Drone Man:  “I’ve been bamboozled all these years.  Are you sure these numbers are right?”

Drone Man:  “OK, then I confess.  I’ve been wrong a long time about the Republicans’ economic policy.   Tax cuts concentrated at the top aren’t the silver bullet for economic growth.”

Drone Man:  “No I gotta go and get back to my niece’s tour group.  I hate to say this, guys, but thanks for the lesson in economics.  And the lesson for me — no more Republican 3-card monte games.”