Trump: “The list is tremendous…very long, very long. For one thing employment is higher than it’s ever been. Just look at all the new employees we’ve added this past year. Tremendous, right?”

Board Member: “Well, let’s put your claim in perspective. Just so we are talking apples to apples, what was the percentage increase in employment?” 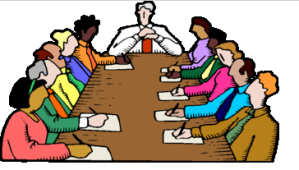 Board Member: “So you want to compare the number of employees added this past year to employment say 20-30 years ago when the company was much smaller. Did I understand you correctly?”

Trump: “Look, I know I’m a winner. No one else is better than I am. Why are you always challenging what I say? You should jump on my wagon. What’s wrong with you anyway?”

Board Member: “The Board challenges your claims because you have a history of lying and cheating.”

Trump: “Says who? Tell me who said that. I’ll fire the SOB.”

Board Member: “We know you’ve lied about the results of the company. We also want to talk about lying in your personal life. Your actions do not reflect well on the company.”

Trump: “Whadda mean? My personal life is clean as a whistle. I’m a germaphobe, you know.” 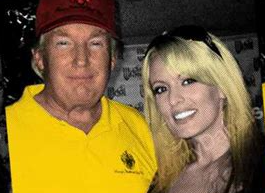 Board Member: “Is it true you had an affair with an adult film star?”

Trump: “You mean Stormy? That was no long-term affair. Just a fling. Besides being with her was educational. When I want to learn something new, I go to an expert…and trust me, Stormy is an expert.”

Board Member: “Calling Miss Daniels an expert might be the most honest statement you’ve made while CEO of this company.”

Trump: “I know she’s an expert because she’s expensive. I mean really expensive.”

Trump: “Why do you keep calling me Mr. Trump? I’m the president and CEO of this company. You should address me as Mr. President. I deserve it. Understand?”

Board Member: “Like I said, Mr. Trump, could you please explain your relationship with Deutsche Bank?”

Board Member: “We know you have a relationship with them. Why did you select Deutsche Bank?”

Trump: “Because none of the a-hole US banks would lend me money. Those banks are all filled with liberals.”

Board Member: “Excuse me but the banking industry is hardly filled with liberals. Did the US banks refuse to lend you money because you stiffed them? Refused because you defaulted on loans several times?”

Trump: “All those bankruptcies were not my fault. If the other partners had just…”

Board Member: “…Pardon me for interrupting but weren’t all those projects managed by the Trump organization? And didn’t all the properties have Trump as part of their name?”

Trump: “There you go again, trying to blame me for something I had nothing to do with. When’s this witch hunt going to end?”

Board Member: “So the Trump projects fail and declare bankruptcy…at least six as I recall. And when the projects go BK, the banks get stiffed. Then when you want to start another project, the US banks say ‘no thanks’ so you turn to Deutsche Bank. Just what did Deutsche Bank get in return for lending you money?”

Trump: “A decent interest rate. You know what a tough negotiator I am.  The other guy always loses.”

Board Member: “Please, Mr. Trump, we’re not that naïve. After all those BK’s, you were in no position to negotiate anything. We know you’re not a reader and would rather watch TV. I assume you’ve seen the movie the ‘Godfather’?”

Trump: “One of my favorites.”

Board Member: “Well, when people came to the Don…not you, the head of the Corleone Family…they were in no position to negotiate terms. The Corleone’s always ended up with more than what you label a ‘decent return.’”

Trump: “If you’re so smart, tell me what do you think Deutsche Bank got?”

Board Member: “Earlier in this conversation you said your involvement with Deutsche Bank included laundering money.”

Trump: “’Laundering money’ was a slip of the tongue. I corrected myself.”

Board Member: “Based on the fines assessed against Deutsche Bank for laundering money…and some other information we’ve secured about your finances…it was no slip of the tongue.”

Board Member: “Want us to show you the evidence? One thing you need to understand,

Mr. Trump, we know how you are obsessed with trying to appear wealthy. So part of our investigation included following the money trail. If you’d like we can take our findings to the FBI or IRS.”

Trump: “Liberal organizations…and unfair to American patriots like me.”

Board Member: “You’re leaving us no choice, Mr. Trump. The Board has made a decision.” 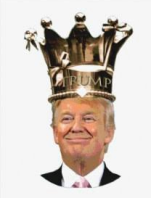 Board Member: “No, Mr. Trump, you are not king…and now you are no longer president. You’re fired.”

Board Member: “Mr. Trump, your next decision is to step down quietly or face likely prosecution for you, some of your staff and some family members. Your choice.”
———————–
Jordan: “Gelly, I finished the memo. Thanks for giving it to me.”

Gelly: “Your predictions were pretty accurate.”

Jordan: “Trump chose to fight, which was a big mistake on his part. His ego got in the way. He just couldn’t leave so the FBI ended up taking him out.”

Gelly: “Do you think the Revenge Revolution could have been avoided if Clinton had won the election? She really won but didn’t win the Electoral College. You know what I mean.”

Jordan: “I know what you mean. My answer is the Revenge Revolution would have happened anyway.”

Gelly: “You think the hard-right Republicans were hell-bent on destroying the democracy regardless of who won?”

Jordan: “Yes, but let’s hold that discussion for later. I need a break.”