Matt:  “OK, you’re suggesting the individuals in the black community in

Charlotte, or at least the rioters in Charlotte, look in the mirror and acknowledge that they need to take charge of their lives.’”

Matt:  “So, if I’m part of the black community and decide to take charge of my life, what am I supposed to do?  Where do I start?”

Jordan:  “I feel as if I’m a broken record.  Let’s start with the basics.”

Jordan:  “Matt, Matt.  You’re a reporter, a writer, and if I remember correctly a history major.”

Jordan:  “I’m not sure why people don’t get my point.  Racism has existed at least

since the Egyptians enslaved the Jews about 6,000 years ago, and probably before that.”

Matt:  “So if racism has been around at least that long, then why should people’s attitudes change now?”

Jordan:  “Right.  My advice to the black community – quit focusing on racism as an issue.  Spend time and efforts on projects that can yield positive results.”

Matt:  “Alright, my last comment about racism.  You don’t think trying to eliminate racism, or trying to reduce it dramatically, is a worthwhile effort.  Is that right?“

Jordan:  “I’m a realist.  As I’ve said many times, trying to reduce racism is like

pushing on a string.  A fruitless effort.  Do a reality check.  Every other…and, yes, I mean every other…every other ethnic group in this country has faced some form of racism.  And many of those groups still do.”

Matt:  “I assume your point is those groups didn’t focus on trying to reduce racism.  Instead they focused on trying to get ahead.  And when they did, most of the racism disappeared.”

Jordan:  “How difficult is that to understand?  If you know you can’t fix 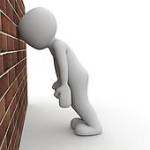 something, why keep trying?  Quit banging your head against the wall and work around the problem.  Whether any of us like it or not, racism is very likely here to stay.”

vision?  Where do you want to be?  #2, where are you now?  List positives and negatives.  Just a list of facts…and no finger-pointing, no excuses. #3, who might help the group achieve their vision?  The only restriction is no one on the ‘who can help list’ should be expected to provide money.”

Matt:  “What will this information really do?  And why no money?”

Jordan:  “To quote Lewis Carroll, ‘If you don’t know where you’re going, any road

Jordan:  “Money is not the issue.  The issue is having the vision.  Where do they want to go?  Having money with no vision is a recipe for disaster.  Talking about money, if any is really needed, comes later.  First, you must have the vision.”

Matt:  “You don’t think they have a vision?”

Jordan:  “You tell me, what’s the black community stand for?  What’s there vision?”

Jordan:  “That might be a cynical response but a view that is probably fairly

widely held.  In contrast, what do you think the Asian community focuses on?  What about the Jewish community?”

Jordan:  “Reminds of a story.  Scene: inauguration of the first Jewish US president.  Person sitting next to the president’s mother, ‘You must be very proud of your son…the first Jewish president.’  Mother responds, ‘Yes, I’m proud.  But you should meet his brother, the doctor.’”

Matt:  “That’s funny, but a lot of truth in that, too.  Let’s face it, though, not everybody is cut out for a college education.  What about those who aren’t?”

Jordan:  “Education doesn’t have to mean college.  Being in the skilled trades requires a lot of training…and will require even more so in the future.  Skilled trades are a great career track.”

community will never happen unless the black community stops focusing on the past and makes a serious effort to decide what it wants to be in the future.  Then lays out where it is today.”