Greenie:  “When we were talking about using the rules of golf as a guide to personal and professional behavior, I was reminded how little Trump followed the rules of golf…and then asked myself, ‘Did he really know the rules?’…and, ‘What else didn’t he know?'”

JC:  “Know about what?  He played a lot of golf so he must have known some rules.  You have something else in mind?”

Greenie:  “Yes.  Did Trump even know what most any 8th grader knows.”

JC:  “Don’t make me laugh?  Not know what an 8th grader know?  Still not sure what you’re talking about.”

Greenie:  “Remember when Trump held that so-called ‘Patriotic Ceremony” after the Super-Bowl champs Philadelphia Eagles refused to go to the White House?”

JC:  “Oh, you mean the ceremony when the Marine Corps Band played ‘God Bless America’ and it was clear to the world that Trump did not know the words?”

Greenie:  “Some patriot, huh?  Bone-spur and all.”

JC:  “Now I think I see where you’re headed.  What about Trump implying…or at least asking…if Canada burned down the White House in 1812?  No that was the British.  Gee, Donald, in case you didn’t know Canada has been a long-time friendly neighbor.  Canada is north of the continental US, except for one area near Detroit, and a major trading partner until you tried to ruin the relationship.”

Greenie:  “How long was the list of stuff he didn’t know that virtually every 8th-grader would know?”

JC:  “Like the Department of Justice is supposed to enforce the laws made by Congress and not be the personal defense attorney for the president’s wrong doing?”

Jordan:  “So, Greenie, exactly what are you proposing?”

Greenie:  “I’m embarrassed the idea sounds so…well, so imbecilic.  But an idea for Making America Great Again is to make sure the presidential candidates…no, make that all candidates for Federal office and all Cabinet nominees…can pass the end-of-year exams given to 8th graders.”

JC:  “Exams given to 8th graders?  That sounds absurd…but a good idea.  How do we test for stuff like knowing the words to ‘God Bless America’?” 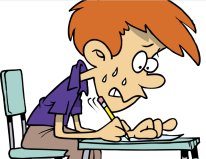 Greenie:  “I don’t know how we’d test for some things but by forcing candidates for Federal office and Cabinet nominees to take 8th-grade end-of-year exams, you can assume that those who pass at least paid some attention to teachers along the way.  And anyone who failed…”

JC:  “…Such as the Donald, who very likely would have failed?”

Greenie:  “Yes, like the Donald and some of his merry band of munchkins, would be ineligible to run or hold office.”

Jordan:  “You really think we should propose something so basic – passing an 8th-grade exam?”

JC:  “I’m with Greenie.  Before Trump became president, anyone who made such a proposal would have been sent off to the funny farm.  But now the idea seems reasonable.”

Jordan:  “How do we frame the idea so it does not seem so, as you said Greenie, imbecilic?”

Greenie:  “Why not be straightforward?  No reason to sugarcoat.  I think we give some examples of basic information that Trump and the Cabinet members did not know.  There are lots of examples where it looked as if they hadn’t graduated from 8th grade and/or should have been wearing dunce caps.  It was embarrassing for the country.”

Jordan:  “Now that we’ve had the Revenge Revolution, is putting forth passing the 8th-grade exam idea opening old wounds with the Trumpsters?  I know most of the Trumpsters lost and we have many new members of Congress but the idea seems a bit petty.”

Greenie:  “I hear you and point well taken.  I also know, as a country, we can’t ignore the lessons of history.  The idea of passing a test given to 8th graders might get ignored.  However, I think we should at least put the idea on the table and generate some discussion.”

JC:  “What about testing candidates for Federal office, at least presidential candidates, for mental stability and maybe a test for early stage Alzheimer’s?  Throw in Cabinet members as well.”

Jordan:  “That idea will be more controversial and more complicated to get implemented.  Might be worth discussing more…but let’s take a break first.”